For many Britons, fitness is one of the most important aspects of life apart from food, clothing and housing. They believe that fitness is an important guarantee of health. A recent survey by the British insurance industry found that Britons over the age of 50 pay special attention to fitness and spend more than 1.5 billion pounds (approximately 14.56 billion yuan) each year.

The British insurance company RIAS research report pointed out that "more than half a year," the British attaches extra importance to physical health, their monthly spending on fitness members more than 130 million pounds (about 1.26 billion yuan). More than 81% of respondents said that the most important reason is "for health." Compared with young people, the British spend more money after 50 years old to purchase fitness membership cards and sports and fitness equipment; more than half of those surveyed said that after the age of 50 they have more time to exercise, on average After about 40 minutes of exercise, the most common fitness program is walking. Swimming, cycling, and stretching are equally popular.

Peter Covefield, general manager of insurance company RIAS, believes: "Facing the continuous growth of the aging population in the UK, the British people's response is to maintain their health. No matter what method they use, people can certainly achieve a higher quality of life." Indeed, the reporter found in long-term observation that many Britons living in the city, especially those 50 years old and above, in addition to running a fitness card, will also jog for one hour in the morning or evening. This kind of aerobic exercise is It is good to protect cardiovascular health. For people living in the suburbs, climbing on the weekend is the most common fitness activity. The British believe that simply participating in indoor running or swimming and playing badminton can not fully mobilize the coordination and operation of the body's muscles and brains, and the long-term perspective is the most suitable sport for individuals and entire families, not only to improve the individual's Healthy body also cultivates a good health tradition for the younger generation.

However, the United Kingdom is significantly affected by the maritime climate, and there are many rainy days in autumn and winter, and outdoor fitness methods are very limited. Therefore, fitness enthusiasts over the age of 50 put more time on the indoor gym. Cardlytics, a credit card data analysis agency, analyzed 550,000 account data and pointed out that fitness enthusiasts will spend more money on health in their daily lives in addition to spending money on the gym, for example, after becoming a fitness member. In the middle of the week, they spent 34% more on fashionable clothes and 11% more at supermarkets. After 2 weeks, spending on professional health stores surged by 55%, and spending on sporting goods stores soared. 96%. The survey agency stated that these bodybuilders are getting better and healthier, and retailers from all over the country are also profitable, because in addition to spending on the fitness card, they will also purchase suitable products according to the guidance of fitness instructors. Healthy food, and expenses in this area require about 200 pounds per month. A survey from the British supermarket chain Sensbury found that the most popular fitness aids include juice, mineral water, bread made from organic flour, organic fruits and vegetables, and various nuts.

In addition, with the development of science and technology, many bodybuilders will also spend money to purchase a variety of wearable smart devices to help them adhere to the fitness program. The Consumer Trends Report 2015 released by the survey agency MINTEL found that from this year onwards, wearable technology has rapidly entered the mainstream market, especially in the areas of health and fitness. Among them, 31% of British adult consumers are interested in watches that use smart health functions, and 40% are interested in wearable devices that can track heart rate, blood pressure and exercise status.

In addition, the sport version of the UBER business model has also become another aspect in which mature consumers over the age of 50 are willing to spend. SportSetter from Finland is currently entering the UK market to attract local consumers. It can find suitable fitness programs and venues based on the user's preferences. Whether it is a traditional gym shaping class, indoor yoga, or outdoor rock climbing, as long as the user If you want to experience it, you can find it on the platform.

High melting point polymer bitumen adhesive laminated to a 30-70 micron aluminium. The adhesive surface is protected by a release coated plastics film which is discarded during use.

Easy application-Installation fast and easy-simply remove the release film and press onto the substrate.

Excellent sealing performance-The specially formulated rubberized asphalt adhesive seals around fasteners, allowing no water to penetrate and get to the substrate.

Long-lasting waterproofing protection-Both the aluminum surfaced polyethylene film and pure alu surface with the specially-formulated rubberized asphalt components create a water and moisture barrier that does not degrade from the effects of the environment. 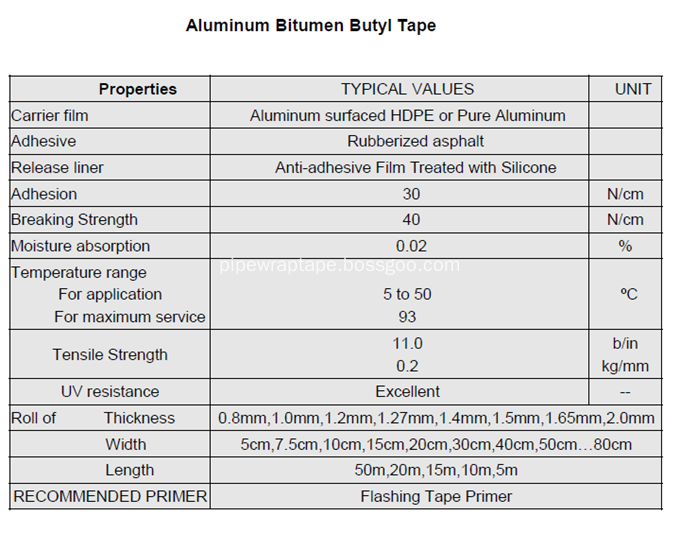